Join Our Mission
Home > What is Audiogram? 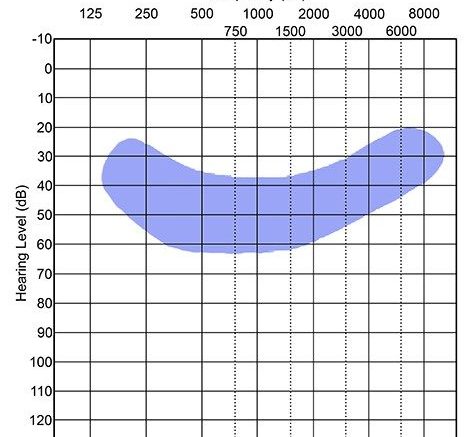 The pitches shown on the audiogram are those most important for hearing and understanding conversation. Each sound we hear when someone speaks has a different pitch and loudness. For example, the “s” sound is high in pitch and quiet. The “o” sound is low in pitch and louder.

The audiogram shown below has a shaded area that shows the range of pitch and loudness for most speech sounds.

How Does An Audiogram Measure Hearing?

During a hearing test, sounds are presented in different ways. When testing with earphones or loudspeakers, the sounds go into the ear canal, through the middle ear to reach the inner ear. This is known as air conduction testing. Air conduction testing looks at how the whole hearing system responds to sound.

When sound moves normally through the outer and middle ear, but the inner ear does not work normally, both bone conduction and air conduction hearing levels will be the same. A sensorineural hearing loss is present.